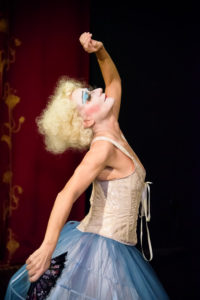 Dance is a performing art form consisting of purposefully selected sequences of human movement. This movement has aesthetic and symbolic value, and is acknowledged as dance by performers and observers within a particular culture. Dance can be categorized and described by its choreography, by its repertoire of movements, or by its historical period or place of origin.

Theatrical dance, also called dance performances or concert dance, is intended primarily as a spectacle, usually a performance upon a stage by virtuoso dancers. It often tells a story, perhaps using mime, costumes and scenery, or else it may simply interpret the musical accompaniment, which is often specially composed. Examples of dance performances are western ballet and modern dance, Classical Indian dance and Chinese and Japanese song and dance dramas. Most classical forms are centred upon dance alone, but performance dance may also appear in opera and other forms of musical theatre.

Interpretive dance is a family of modern dance styles that began around 1900 with Isadora Duncan. It used classical concert music but marked a departure from traditional concert dance.[1][2][3] It seeks to translate human emotions, conditions, situations or fantasies into movement and dramatic expression, or else adapts traditional ethnic movements into more modern expressions.[4]

The effect of interpretive dance can be seen in many Broadway musicals as well as in other media. While it was—and most often, still is—thought of as a performing art, interpretive dance does not have to be performed with music. It often includes grandiloquent movements of the arms, turns and drops to the floor. It is frequently enhanced by lavish costumes, ribbons or spandex body suits.

Cheating and plotting in an aristocratic salon of the 18th century, as each one of five women claims the young man for herself.

Tribute to Georges Brassens: Two evenings – one dedication to the French poet, composer and singer, with 15 from his songs of total duration 60 minutes.

Rebetika songs in a neoclassical ballet dance performance about uprooting, immigration, the clash of the dreams with reality and the force of life.

A perfomance about the ritual dance of Southern Italy by the music of the greek-speaking villages of Calabria.

From dawn until noon, following the steps of “la belle danse”, the passions of love are outdone by a glorifying statement of companionship.